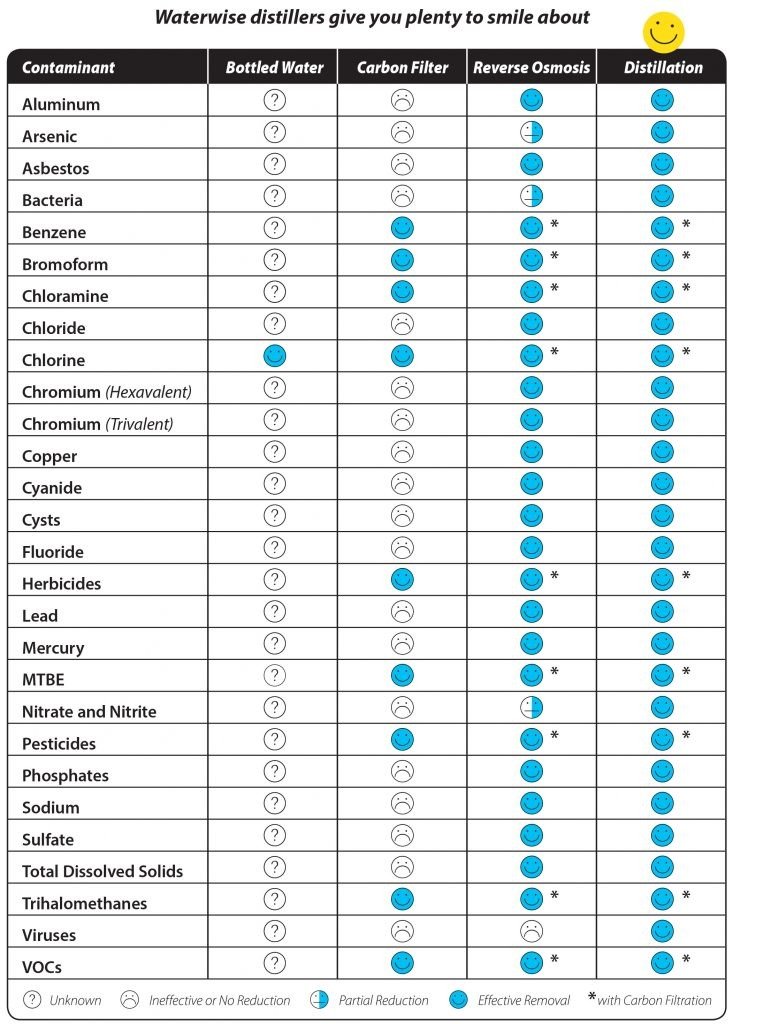 Filtration: Filtered water has passed through a fine strainer and/or activated carbon. While they reduce disagreeable tastes and odors, filters are not effective in removing many common contaminants such as arsenic, bacteria, copper, lead, nitrates, parasites, sodium and viruses. A filter can become a breeding ground for bacteria as the organic material which remains in the filter begins to decay. Another drawback is not knowing when to replace the filter. Some manufacturers suggest replacing filters when bad taste or odor returns. In reality, a filter may be able to control taste and odor long after it has lost its ability to reduce tasteless, odorless organics such as THMs (trihalomethanes) which are byproducts of chlorination.

Reverse Osmosis: RO systems force water under high pressure through a synthetic semipermeable membrane to reduce inorganic minerals. These systems vary widely in their ability to reject nitrates, chlorides and some other contaminants. RO performance is affected by water pressure, water temperature, pH, bacteria, dissolved solids and the chemical contaminant level of raw tap water. Like other filtration systems, gradual clogging of the system by collected contaminants will result in declining effectiveness and can also lead to contamination from bacterial growth.

Steam Distilled: Based on Mother Nature's primary purification method, distillation uses evaporation and condensation to separate pure, fresh water from its contaminants. In nature the process is called the hydrologic cycle. It occurs when water evaporates, condenses, then falls to the earth as precipitation. Distillation, combined with carbon filtration, is the one water treatment technology that most completely reduces the widest range of contaminants, including biological, organic and inorganic elements. In fact, a quality distillation system provides water that is up to 99% free of impurities, including heavy metals and most chemicals. It is the treatment of choice for removing biological contaminants including cysts like Giardia and Cryptosporidium. The prolonged boiling process of distillation kills virtually all types of microorganisms, including bacteria, viruses and parasites. Microorganisms are not evaporated into the product water but remain in the boiling chamber as part of the residue. Additionally, a distillation system with activated carbon post filtration and venting is effective in removing pesticides and VOCs (volatile organic compounds). Distillation provides consistent purity, gallon after gallon, year in, year out. No other technology can guarantee consistent quality over time. The purity of your drinking and cooking water is guaranteed when you make 100% steam distilled water with a Waterwise purifier/distiller.